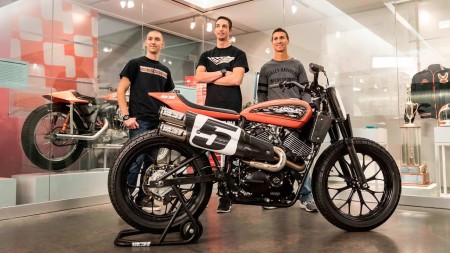 The Harley Factory Flat Track Team expects to elevate its performance during the 2020 season with the addition of former champions Ricky Howerton and Bryan Smith, winners of the 2016 AMA Grand National flat track championship. Howerton will serve as crew chief, leading the talented three-rider Twins team, alongside Smith, Jared Vanderkooi and Dalton Gauthier.

“Flat track motorcycle racing is the original American motorsport and Harley-Davidson and its factory teams have been part of this exciting competition since its inception more than a century ago,” said Jon Bekefy, GM of brand marketing. “Our expanded factory team effort in AFT Super Twins complements our increased support for the AFT Production Twins class, with race-ready XG750R motorcycles for sale to independent teams and a $250,000 cash contingency program.”

“We are excited to have Ricky Howerton joining the H-D Factory Team,” said Terry Vance, owner of Vance & Hines Motorsports. “He brings a wealth of knowledge and championship experience to an effort that already includes the tuning talent of Byron Hines and engineering resources at the Harley-Davidson Product Development Center. With our trio of great riders, I think we’ll be bringing a formidable team to the track in 2020.”

“I think the Harley-Davidson Factory Team has all the ingredients in place to field bikes that can win every weekend, and the resources are there,” said Howerton. “We’ll have everything and anything we need to move the program forward.”

The team will field an updated Harley-Davidson XG750R flat tracker for 2020, according to Terry Vance, owner of Vance & Hines Motorsports. The bikes is powered by the liquid-cooled, fuel-injected and race-tuned 750cc Harley-Davidson® Revolution X™ V-Twin based on the production engine originally designed for the Harley-Davidson Street 750 motorcycle.

The Harley-Davidson Factory Flat Track Team will compete on the entire 18-event AFT SuperTwins schedule in 2020. The series kicks off on March 14 with the Daytona TT at Daytona International Speedway, Daytona Beach, Fla.