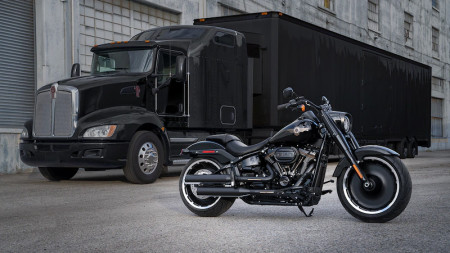 The hero of road-commanding cruisers has arrived. Meet the Fat Boy® 30th Anniversary Limited Edition, a celebration of one of the most iconic motorcycles ever created by Harley-Davidson. Serialized badging commemorates the bike as 1 of only 2,500 in the world. Carve out a legend of your own.

After three decades of near-consistent popularity, including appearances in Terminator 2, Wild Hogs, Seinfield and The Sopranos, Harley-Davidson has deigned to give the iconic Fat Boy a celebratory shout-out in the form of a special edition. Say hello to the mid-year 2020 Fat Boy 30th Anniversary model, which celebrates the original with a preponderance of black finishes, a serial number plate on each unit, and a single color option, Vivid Black.

The special edition takes the Fat Boy to the dark side with a fully blacked-out look, from the Satin Black 21-inch dish at the front to the Onyx Black dual exhaust at the back. The model uses the same Softail chassis as the standard Fat Boy and runs on the same Milwaukee Eight 114 engine—with a blacked out block, of course. There is some light in all the darkness thanks to the addition of subtle bronze accents that allow the badging to stand out.

If you want to partake in the celebration, you’ll have to act quickly as the special edition Softail will be limited to a 2,500-units run.